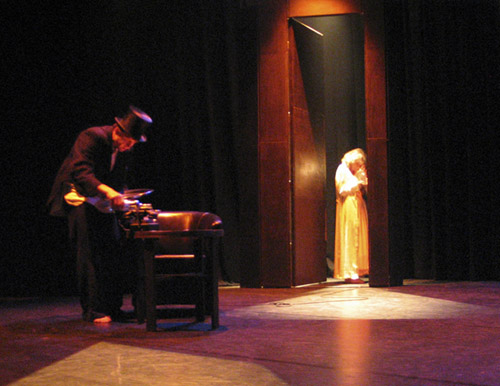 Trained as a painter but disillusioned with art school, Clea Wallis set up her own studio in Hoxton London as an experimental work space for collaborations in 1982. After spending time in New York studying with the expressionist choreographer Anna Sokolow she was invited to Wuppertal through German play-write Heiner Muller. Clea spent eight months with Pina Bausch’s Dance Theatre observing and taking company class. In 1984 Clea set up Dudendance with friend and writer from Berlin, Anne Duden and an original group of seven performers and dancers including Paul Rous who she had met at Camberwell Arts School. Early work was inspired by Anne Duden’s writing and drawn from personal experiences of the dancers through improvisation. The chemistry of each group shaped the work which was assembled in a collage like structure. Early pieces had a throw away intense quality with comedic performances that were of the moment. The company consisted of 7-9 people at any one time producing a stream of pieces that were shown in London venues such as The Place, Oval House, French Institute, Tabard Theatre, ICA and Battersea Arts Centre. Non- theatre environments included warehouse parties, church halls, night-clubs, cinemas, artists studios, stations and outdoor markets. Dudendance also toured to festivals in Germany, France and Belgium. In the late 80’s early 90’s there was a distinctive change in London, many smaller fringe theatres shut down, studio rents were getting expensive and it was harder to create unfunded productions.

During 1990-92 the group were invited to Brasil by Martha Moreira Lima for a residency at the Imperial Palace Museum and subsequently Campinas University. They spent two years working on large scale productions and street theatre spectacles with groups of university students and local performers. These productions were toured to shantytowns as part of the cultural programme of the P.T. (Lula’s Workers Party) and to festivals throughout Brasil and Argentina. It was an exciting challenge to create for large theatres on an operatic scale – and then to re-adapt for the street. Sphinx Hinter Gittern was performed in Brasil’s colonial theatres, the auditorium became the set with the audience seated on the stage.

In 1994 Dudendance came to Glasgow on a commission from Paisley Arts Centre. A core of three performers remained in Scotland. Anna Krzystek, Kate Gigg and Clea Wallis continued to work together and run a workshop programme The Glasgow Dance Project with yoga teacher Gerry Kielty. Tetrachord a 1995 dark/light Tramway commission with German composer Jan Feddersen was inspired by Walter Benjamin’s essay on Kafka - an experimental sound/performance piece with much of the action hidden from the audience. The Man Upstairs 1996 was a collaboration with Argentine director Carlos Lipsic based on the idea of an American game show peopled by cartoon characters. Tango / Car 1 and Detour 1 were the beginning of work on super 8mm film. Working in locations around Glasgow the company of three dancer/camera operators developed a choreographic process with fluid camera work and a distinct relationship to the environment. Footage was integrated with live performance in several pieces: Detour 1 - 2, Frenzy and recently Droopy met Hal. The process was reversed with Capture the Spirit, a stage show performed in Rio that was then made into a short film.

In 2002 Clea and Paul were invited by Deveron Arts in Aberdeenshire for a ten month residency. They subsequently made Huntly their home and face the challenges of working in a rural community and for the first time with children and young people. With the assistance of producer Jean Cameron Dudendance toured Café Bohemios a tango/ cabaret/ workshop evening throughout North East Scotland with a cast from Argentina. The piece attracted large audiences which also helped Dudendance’s visibility in the rural community. Clea and Paul have been running filmmaking summer schools in Huntly joined by artist David Blyth in 2005 to form Second Site Film. Last year Dudendance toured extensively with Droopy Met Hal a co-production with Fabrik-Potsdam which played Internationally, in Scottish venues and as a durational piece for public spaces. Clea is currently researching for two international co-productions with Argentina and Brasil and Paul is working on a one man show Spaceman which will be developed for touring in 2009.